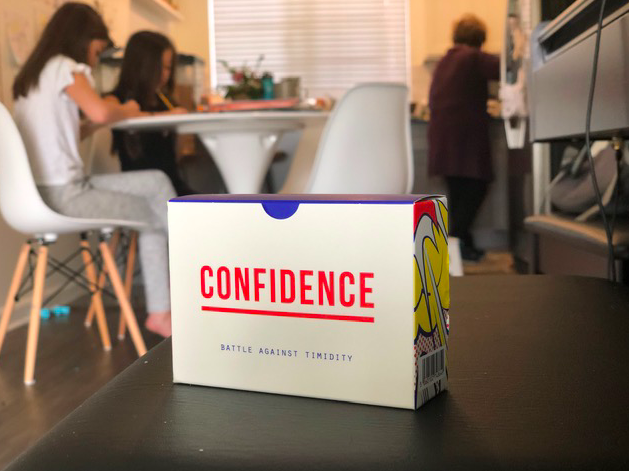 Box of cards
FOR THOUGHT PROMOTION
I bought this set of cards at the Postal Service Shop at the Marin Country Mart because I like the clerk and wanted to give him some business. The girls like the inspirational cards and are always begging for the ones at Paper Source that inspire them. I had Drew, the clerk, wrap the box and he put on a nice pink grosgrain ribbon..

This morning, with breakfast, I decided to give the cards to the girls as an early Valentine gift because I am leaving on the 12th.

So, we opened the package, each took a card and started to read them out loud:

“Once we learn to see ourselves as already (and by nature) foolish, it doesn’t matter so much if we do one more thing that might look stupid. Failure won’t be news to us; it will only confirm what we have already gracefully accepted in our hearts: that we, like every other person on the planet, are nitwits.”

I decided to take them back to the store, but we decided we needed to document the ineptness of the writer by copying some of them first.

Our 11-yr-old announced, “Let’s make some of our own cards.” She ran to the copy machine, got some card stock. We found the paper cutter and cut them into fourths. She set a bunch of pencils and markers on the table. Then, we were directed to begin.

I was hugely intimidated because the girls are almost professionals in calligraphy themselves and take after their grandpa in their ability to draw. Their drawings are displayed all over their apartment walls and I am so proud of their creativity. The first thing I said to myself was, “My mind is a blank, I can’t even think of anything in my own words.”

I needed to force myself to participate and wrote, “I am not afraid to mess up, then, I can do it better.” I ended up making 15 cards and felt good about myself, half an hour later.

We need to keep the cards as an example of bad writing. I decided to take them to the Lunar New Year party later this afternoon. We are invited to dinner to celebrate and we think the cards will be a good party laugh.
Email