Arriving at Bellevue, Washington’s, contemporary Westminster Chapel just in time for the lights to dim, I quickly sit along the aisle in the left section. The Bellevue Philharmonic is playing Respighi’s CHURCH WINDOWS, but I am reliving last weekend’s 500 mile trip to visit with a favorite aunt and uncle in Ontario, Oregon and enjoy a family reunion.

The horns announce the descent from Eastern Oregon’s Blue Mountains into the Treasure Valley and the turn off Interstate highway I-84 into Ontario. The low tones of the clarinets suggest the low clouds and drizzle driving along Idaho Avenue. The kettle drums roll along with a periodic tap on the bigger kettle as I recognize the familiar landmarks of my hometown, “There’s where the Ontario Fish Market used to be.” That was our family business.

My memory turns me left at the Elk’s Lodge and the violins point out the exceptionally green, carefully manicured lawn and lets me know it is my aunt and uncle’s white house with the green awnings as I park.

I step through the screen door onto the enclosed porch and knock. The cymbals crash a waft of acrid smell as I open the door and the base fiddles tell me how dark it is as I enter the living room that has not changed in 45 years. The long sofa is on the right and the stuffed chairs on the left with towels and spreads protecting the fabric. Regular paid help keeps everything in perfect, spotless order as directed, but the years have put a gray wash on colors that were originally muted and quietly elegant.

Straight ahead on the day bed next to the mahogany dining set is my aunt, like an elegant French horn. As I get closer, I see her curled hands and feet from her 20 year decline with arthritis since she was in her 50s. The beat is slow and the tones are low as she can only move an inch at a time and has not been out of the house for years.

“How are you?” the French horn greets me.

“I am fine,” the saxophone answers for me.

And like Auntie’s prompt and meticulous letters, we catch up on the weather, what her children and grandchildren are doing and how much she enjoyed the chocolates I had sent. She always shares chocolates or jam with workers and visitors.

The oboe, my uncle, joins the conversation. In hesitant melancholy tones, he says, “I didn’t know anything about it until they sent me this. Here’s the press release you wanted.”

It is the announcement that he, as a small business owner of a grocery store in Ontario, has been named runner-up to Fred Meyer as 1972-73 Oregon businessman of the year when he was 54, my age now.

Later, when we are alone, Uncle says, “This ice pack on my back helps me get a few hours of relief from the pain so I can sleep.” Then he holds his chest and shakes his head as if trying to clear the fog of depression and says, “I can’t overcome my panic attacks. Walking helps, but as soon as I come back in the door, it’s the same again.”

On another day, he leaves the family reunion banquet early because he feels he cannot leave his wife alone for more than an hour or so.

As I am leaving this summer weekend family reunion, my aunt comments, “I think of what I might be doing if I weren’t crippled. Sometimes I wonder what I could have done that was so bad to deserve all this?”

I become aware that I am still in Westminster Chapel. The music crescendo builds. My fingers are tightening, my lips are thinning, my shoulders are tensing as I feel years of her love, fears, determination, frustrations, resentments, helplessness and anger held majestically in an alert mind and uncooperative body.

The triangle rings out my disappointment because she and I can’t play together. I always thought that someday I would repay my aunt’s kindnesses by going with her to a New York Broadway play or on a cruise to Alaska.

The bass drums pound out my anger because my uncle has been a responsible, giving person all his life and this is his pay. He was the oldest son, taking his role seriously. He was the one who helped his grandfather, during the depression years, to eke out an existence on his farm in Japan at the age of 6 years old. When Uncle's mother died in 1926, he and his 3 siblings were taken to Japan. It was his determination that built the successful Ontario Market grocery business after he returned to America. In 1985 he was Grand Marshall for the annual Ontario Christmas parade.

The conductor’s exaggerated gestures portray frustration because of my aunt and uncle’s dark prison-like existence I see and feel helpless to alleviate. As the music is concluded. I think of the saying that goes: “There is no such thing as a problem that does not have a gift.” Where are the gifts for them? 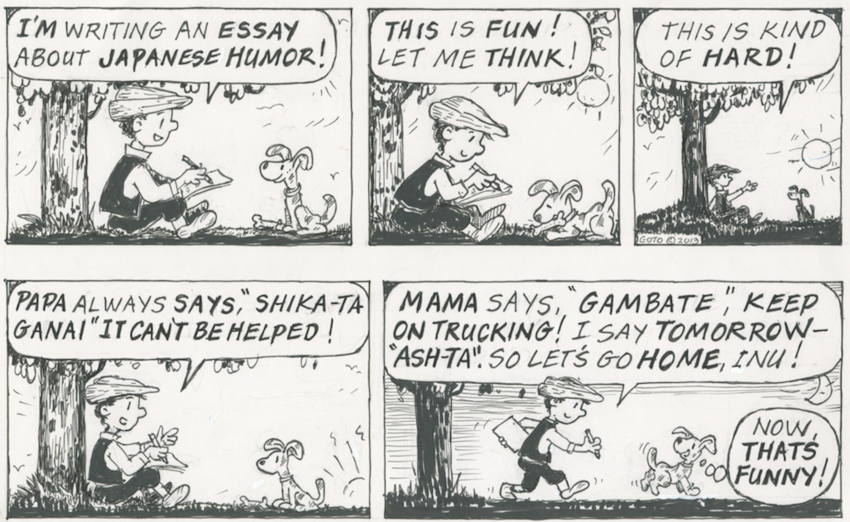 GAMBATTE - PERSEVERE, OVERCOME OBSTACLES
"KEEP ON TRUCKING"
Signing up for a fiction writing class is a major challenge, but what else is there to do with Covid-Isolation?

I consider myself a fair writer and a descent recorder of incidents.

Our first assignment is to write a "flash". Now that I have read as to what a flash might be, it's something I feel comfortable trying because it's short. Short, is the way I write to keep the reader's attention?

Here's my example: BORN IN CAR
It was 2am, the morning after Valentines 1944. The tan one-seat 1940 Chev coupe with only a window and shelf-like ledge behind the seat, was slipping and sliding as well as speeding the 12 miles to the hospital, along the snowy country gravel road, from their farm in a place called Sand Hollow. The Japanese man was driving, his wife in labor next to him and the 5-year-old, half-dressed girl, with a coat but no shoes, curled up in the window ledge. “Hurry, hurry! It’s coming! It’s coming! in exaggerated but muffled whispers so the 5-yr-old would not be frightened.

"I'm... going as fast as I can," was the frantic reply. He parked in front of the hospital steps, ran to get help and was followed out by a nurse. They clamped the umbilical cord and cut it. The placenta was laid on the hospital steps while they carried healthy baby and assisted the mother into the hospital. Coming back to clean the blood and debris, the nurse was shocked to have totally missed seeing a 5-yr-old still on the window ledge, until she heard the child's voice, “Won’t the baby freeze out there on the steps!?”

WHAT DO YOU THINK??