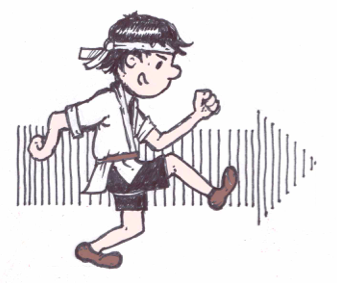 KEEP ON TRUCKING
PERSIST, OVERCOME, BE SUCCESSFUL
DO IT WITH GRACE
Today, I found myself suggesting, out loud, “Now that things are getting tough, learning starts!?”

Here’s the issue. On March 13th the girls got their long time wish. They got a Bernedoodle puppy “Suki” with all kinds of excitement, promises and signed contracts to do what was necessary to take care and train it.

One hundred and one days later, the puppy is so hyper and smart, it’s being a rascal. Suki knows how to learn her training skills in one or two tries for treats, but in reality will only come when she feels like it. She learned how to communicate by barking and uses it to an excess to get attention.

Suki gets bored and barks when Mom is on her business calls because her attention is not available. The girls have kept their promise, but are not as enthusiastic and complaining about taking Suki on the walks and exercise needed. The 13-yr-old says, “‘I’ve changed my mind about wanting all kinds of animals.”

In her book, THE GENIUS OF WOMEN, Kaplan suggests, “Geniuses need coaching and mentoring.” Therefore, children, genius or not, need good parenting to stay on track when life gets “hard”.

Tonight, Grandma is bored with Covid Isolation, still get a few tears feeling lonely without a partner, tired of political news and finding it “tough” to decide what I want to do with my new life.

Maybe it’s time for me to learn more? Time to take my own advice? Time to listen to Grandpa say, “Gambatte!”

Today, I re-listened to Dr. Jordon Peterson suggesting “writing and reading” as one of the main ways to cope with life’s problems. I found the YouTube ROOM FOR DISCUSSION video interview a couple days ago.

According to Emma Whitford, “only two-thirds of college students in the United States have ever written a paper that's 10 pages or longer. This statistic is part of a new report by Primary Research Group, based on a survey of 1,140 college students at four-year institutions in the United States about the writing and grammar instruction that they’ve received and how much additional instruction they believe they need.”

I write, but I can set a goal to be known as a writer as MY legacy? 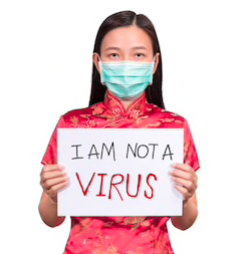 PRIVILEGED TO BE A PERSON OF COLOR
Our cousin marched in the Seattle 2020 Protest event carrying a sign: ASIANS FOR BLM.

Dr. Ibram Kendi was just on BOOK TV talking about his book: HOW TO BE ANTIRACIST. He ended his talk with equating racism to his diagnosis with Cancer in 2016 - need diagnosis and treatment until all the bad cells are gone. Legislation and funding is his answer.

Coincidentally in our other room, my daughter was having a business conversation with Brent Rollins and Steve Gordon, who are black. Brent is a designer known for Boyz n the Hood (1991) work. He said, “Racism is like having Cancer. We all have Cancer cells in us. I’ve lived with it all my life. So what do I do?? It’s up to me to make good life choices.”

Shelby Steele, who wrote SHAME, and other activists say we need more history in our schools. Ian Rowe says, “We need to be agents in our own destiny and purchase HOW TO EDUCATE AN AMERICAN. Work at the local level.”

I lived on 23rd Ave E where the marches during the 60s came by our house. We benefited from the activism; but as a Japanese Sansei, I performed back door actions. At Stevens Elementary, I co-taught with Juanita Thomas - who is black and we are still friends - sending notes home with kids who needed tutoring, asking parents to come to my house for meetings. We shared, “If your kids don’t learn, It’s our fault.” We wanted the parents to feel as good as possible as they asked us, “What can we do?”

Jeffrey, 6-yr-old, came to school late every day. His mother came to one of our meetings. She was probably prostituting to make money and worked nights. She came and bragged about how her son got up, fed and dressed his little sister every morning before walking the 10 to 12 blocks to school. WOW, what we can learn when…!

After being hired to start the UW Library Japanese Special Collections in 1970, I continued on a Min Masuda Memorial committee. Hana, Min’s wife, was also on the committee. She and I made a “pact” that we do something in our Japanese in America community the rest of our lives. After two decades of collecting stories and documentations; in 1991, I decided it was important to write and share our stories for the benefit of the larger community with a writing group, OMOIDE (memories). With OMOIDE now at the “J”, we share personal stories of Japanese Immigration, incarceration, resettlement and heritage values. Go to jcccw.org for more information about the “J”.

In his book SEATTLE 1900-1920 on page 66, Rich Berner says, “Japanese immigrants to Seattle played a role in the city’s development far out of proportion to their number.”

One of the early (6th Century?) emperors in Japan was the first to indicate education for the commoners. The Japanese had almost 200 years, from 1600 - 1800, of no wars where they promoted the education of cultural arts that came with personal discipline and brought it to a science. The “J” can share these arts and discipline, with those who want, for more personal fulfillment in our lives.

Since I was born 81-years ago, I was taught to be proud to be a person of color. I ended a friendship with someone who talked about, “Your people.” I practice, “Gambatte", “Nana Korobi, Ya Oki (7 times down, 8 times up)”, “Makeru ga Kachi (losing is winning)”. Sharing stories and promoting viability/visability of the “J” and OMOIDE for the rest of my life is what I can and will do, “putting words down on the bloody paper!”. 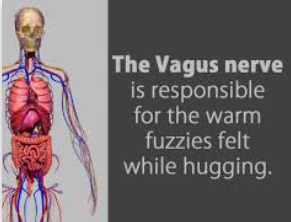 The vagus nerve is the longest cranial nerve in my body, connecting my brain to my heart, lungs, and stomach. It helps aid digestion, sleep, and breathing and it controls my anxiety, depression and mood. The vagus nerve drives my parasympathetic nervous system - in charge of regulating rest, digest and “well-being” responses.

Here are some of the things I'm choosing from a list of suggestions:
*For my Emotional State - spending time with people I like, upbeat music, laughing with some clever emails.
*For Meditation - it's suggested I need to include compassionate thoughts of others. I choose the time as I take a hot bath every night for this exercise.
*For physical activity, I work to get 10,000 on my FitBit with most of it on a rebounder.
*For a massage, I have this set of balls for my feet and one called "courageous" that is soft to roll on, on the floor. There is a HYPERVOLT hand held massage gun.
*For my diet: I minimize sugar and try intermittent fasting. Of course I use Shaklee supplements for the suggestions related to Omega-3 and probiotics.

Smiling as I watch and read as much "feel goods" as possible. Had a good time today learning more about WINGS OF FIRE that is a favorite fantasy the girls read over and over.

What are some other things we can do during these interesting times?? 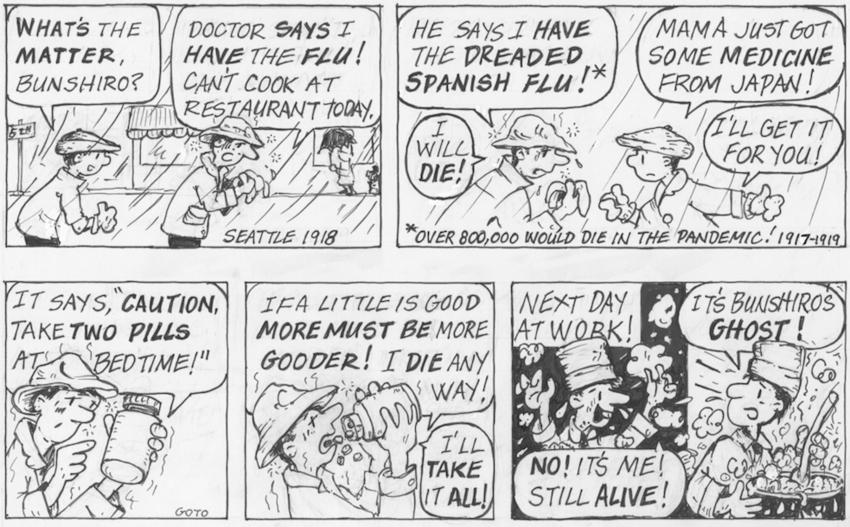 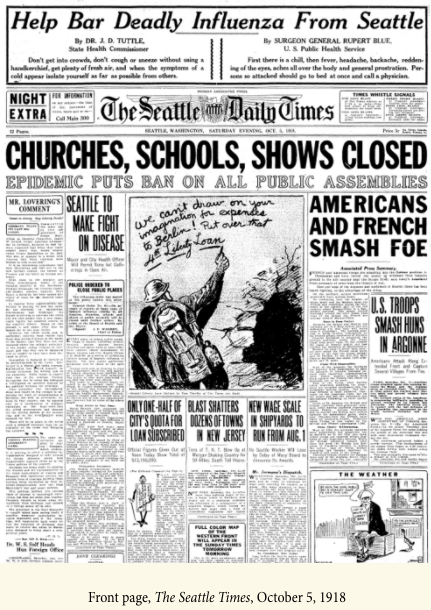 Bunshiro was Sam's father, Nisaburo's cousin and known best as the owner of the Tazuma 10-Cent store at 12th and Jackson in Seattle's International District. He was around the age of 30 and lived to be 103.

The story is that Bunshiro's wife and infant son had just arrived from Japan and she had brought with her this all-purpose cure-all known among the immigrants from Japan at that time. Some of the ones I saw around as I was growing up were little bead-like and silver in color. Seems like my grandpa used to call it, "Ginro or Gorin" or something like that.

Bunshiro had come to America and worked on the railroad and in the restaurant business from 1908. He had returned to Japan to get married and was back in Seattle working at the Jackson Cafe when his wife arrived with son Elmer and was put up in the hotel across the street. It might have been the NP Hotel run by the Shitamae family because we know that is where Nisaburo lived.

100 years ago, an influenza (flu) pandemic swept the globe, infecting an estimated one-third of the world’s population and killing at least 50 million people. The pandemic’s death toll was greater than the total number of military and civilian deaths from World War I, which was happening simultaneously. At the time, scientists had not yet discovered flu viruses, but we know today that the 1918 pandemic was caused by an influenza A (H1N1) virus. The pandemic is commonly believed to have occurred in three waves. Unusual flu-like activity was first identified in U.S. military personnel during the spring of 1918. Flu spread rapidly in military barracks where men shared close quarters. The second wave occurred during the fall of 1918 and was the most severe. A third wave of illness occurred during the winter and spring of 1919.

Currently, regarding the 2020 Covid-19 empidemic, Japan’s culture of concern for others, keeping a distance, avoiding handshakes, and good personal hygiene appears to have played a significant role in having one of the lowest statistics related to incidence and deaths in the world. This is despite inadequate testing.