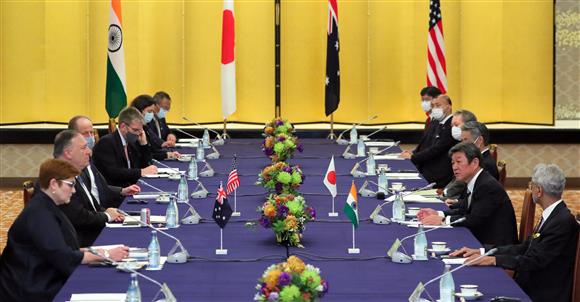 
China is becoming increasingly wary of the four countries - Japan, the United States, Australia and India - strengthening their ties through the latest foreign ministers' meeting, according to a report by Beijing-based Shohei Mitsuka. This is because it could lead to a strengthening of the "China encirclement" called for by the Trump administration as relations with each of the three countries, except Japan, deteriorate after the spread of the new coronavirus. China is increasingly opposed to the U.S. and other countries, but it is taking a different approach to avoid pressure, such as by taking a closer stance toward Japan.

On April 6, the Hong Kong Economic Daily (electronic version) reported that the meeting "is expected to show unity in the four-nation security dialogue amid China's clashes with all of the United States, India, and Australia. There has been no official reaction to the meeting, partly because it is in the middle of the National Day holiday weekend, but it is clear that China is closely monitoring the meeting, as it has hinted in advance that it should be framed in a way that would not be detrimental to a third country.

China is currently at odds not only with the United States, but also with India and Australia. With India, the militaries of the two countries clashed in Ladakh in the northern Indian state of Kashmir, where the line of effective control between China and India runs through. China's demand for an independent investigation into the outbreak of the new corona has been met with a fierce response from Australia, and the situation with Australia remains uncertain as to how to ease tensions.

China is concerned about the expansion of the U.S.-Japan-Australia-India framework. If Vietnam, New Zealand, and other countries join, the U.S. will be forced to contain China. In order to avoid this, it is believed that China wants to stabilize its relations with Japan.

When Prime Minister Yoshihide Suga took office in September, China sent a congratulatory telegram in the name of President Xi Jinping rather than the name of the prime minister, which had been the customary practice, and has taken a stance of attaching importance to Japan. Diplomatic sources in Japan and China have pointed out that it is not in China's best interest to extend the confrontation to Japan and that it is trying to close the distance between Japan and China.