I followed the recipe on the Golden Curry box and the curry tasted delicious.
It has already been close to 10 months since my trip to Tokyo. I bought Java Curry and Golden Curry from the local grocery store because I was feeling nostalgic. Co-workers tell me it is common to mix two brands of curry so that is why I bought two boxes from different brands. In Tokyo, I ate curry every day. My meal reminded me of Japan and only made me wish I was in Japan even more!
#taylorcooks #curry Bacon, cheddar cheese, and mushrooms.
Seattle has a restaurant popular for serving a dish called a "Dutch baby." They are basically egg pancakes and look like a cross between crepes and omelettes. Mine is not as fancy looking as Seattle's Tilikum place. I will have to work on the recipe and bake temperature to get more of a brown crust.

Nonetheless, this dutch baby in my mini cast iron skillet (5-inch skillet) hit the spot this Friday morning. I am particularly fond of the bacon and cheddar flavor combo! 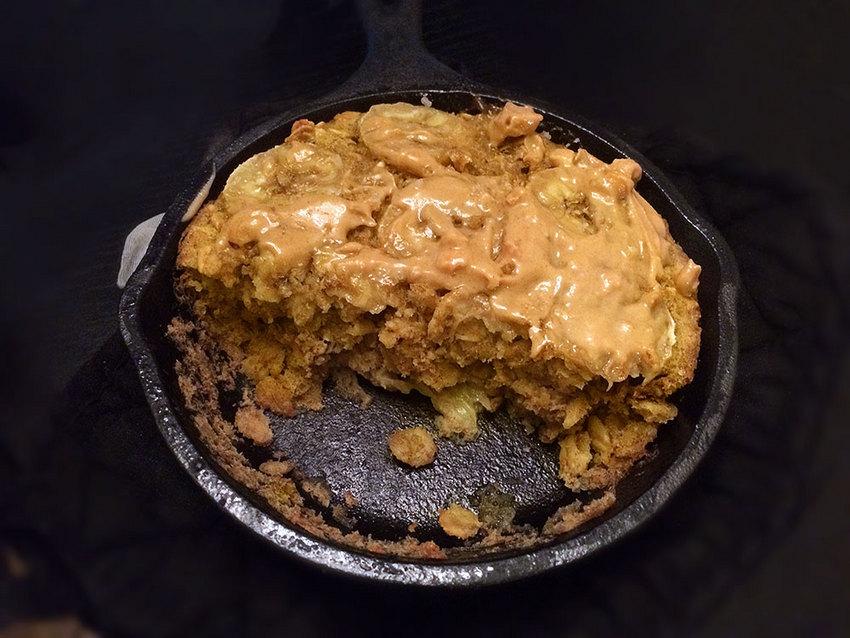 Six months ago I purchased my first cast-iron skillet. Of all my kitchen tools, there are only three that I consider must-haves: a KitchenAid standing mixer, an Instant Pot pressure cooker, and a cast iron skillet. Since I only have to cook for myself, I picked up mini cast iron skillets the other day to make single serving desserts and egg bakes. Today, I broke in the mini skillet with a peanut butter and banana oatmeal bake. The texture was light and fluffy which made it seem like I was eating an oatmeal cake for breakfast. The bonus is that it's healthy. Highly recommended!

Recipe for a 5-inch mini skillet: 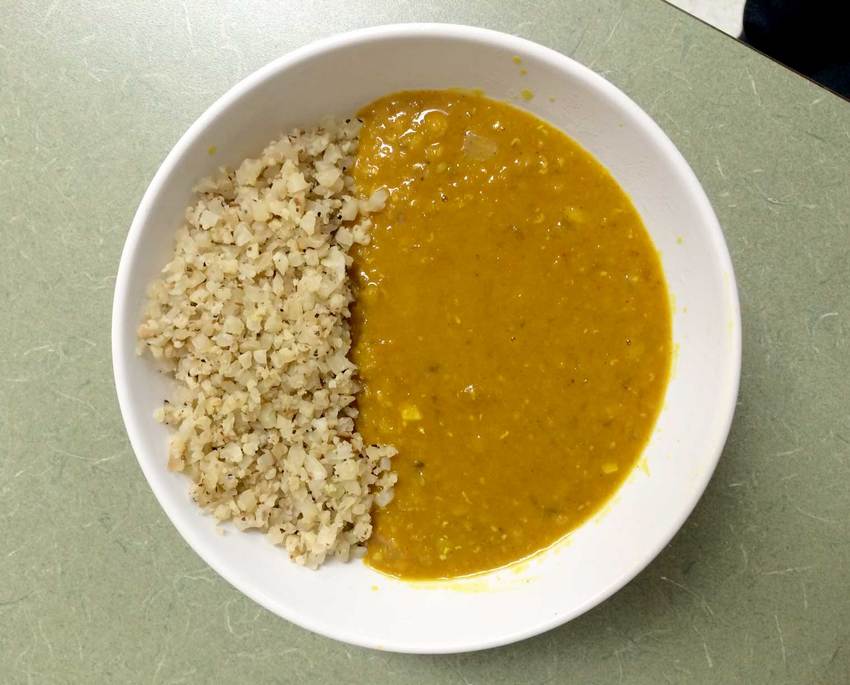 Golden dal with riced cauliflower
Dal is one of my favorite dishes to get when my boss takes our team out for Indian food. Red lentils were on sale for 61 cents a pound so I decided to try my hand at making dal using a recipe I found in my chef friend's Le Cordon Bleu International Cuisine book. The recipe was titled "Tok Dal" and was a simple dish of boiled red lentils combined with onions and garlic sautéed in turmeric, cayenne, coriander, fennel, salt, pepper, and other spices. Instead of calorie-dense naan or rice I used riced cauliflower from Trader Joe's. Riced cauliflower is an awesome rice substitute since it's high volume and low cal – I can enjoy Halloween candy without any guilt after. Next time I will try using chicken stock instead of water for the lentils to add even more flavor. My DIY "Jazzy" Yumm bowl: The mix of bright colors adds to its appeal
I was first introduced to Cafe Yumm during PAX West in September (see here). The food was so delicious that I went back the following day for more. It's impractical to travel to Seattle every time I want a Yumm bowl, but luckily the internet has the tasty dressing recipe for me to make my own Yumm bowls at home. You can find the recipe I used at food.com or search Google for other variations. The bowl ingredients are listed on Cafe Yumm's website. It was easy for me to prepare a batch of rice and beans and portion them out for a week's worth of Yumm bowls! The yumm sauce has that "umami" quality that makes it quite addicting. 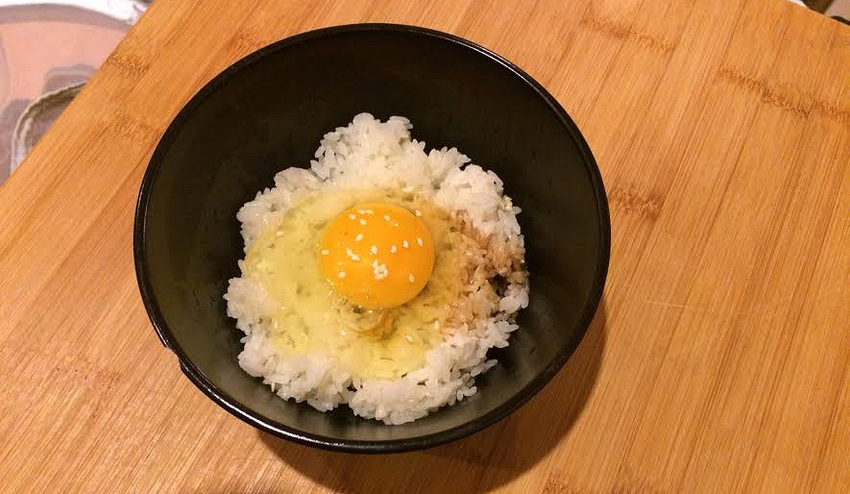 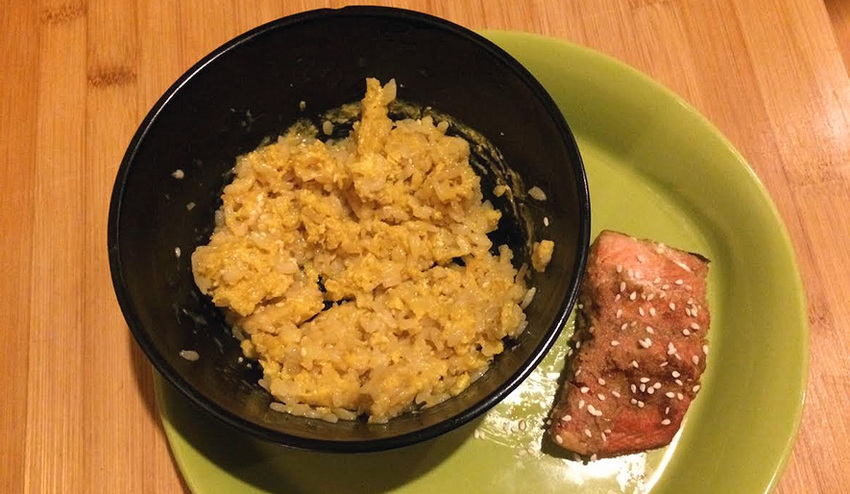 Finished rice and garlic-ginger salmon
This morning I prepared a simple recipe that I found online called Tamago Kake Gohan or Japanese-Style Rice With Egg. I made garlic-ginger sockeye salmon to go with it for a more complete breakfast. I have a Zojirushi rice cooker so I felt like this dish was mostly authentic!

The sesame seeds and soy sauce added a nice flavor to the egg and rice. I microwaved the sesame seeds until they started popping (10-12 seconds) which really brought out their flavor. 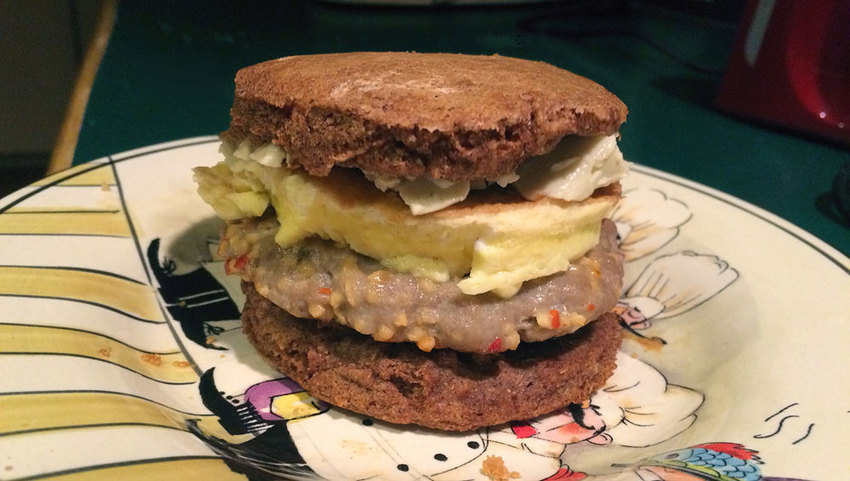 A perfect combo of sweet and savory flavors.
I must admit my love for American fast food. Wendy's, Five Guy's, Culver's, Burger King, and McDonald's all have some tasty food options. One of my guilty pleasures is a sausage, egg and cheese McGriddle from McDonald's. The sandwich isn't a totally awful nutrition or calorie bomb and it tastes so good I would get one when I wanted. However, I was spending too much money on eating out and I had all the ingredients to make one at home. So, I gave it a shot! The result is so good I'm not sure I will be able to justify going out for a McDonald's McGriddle anytime soon. My nutritional profile is much better and I can take creative liberty to season each ingredient to taste.

Mix dry and wet ingredients separately before combining. To get the little pockets of maple syrup like a McDonald's McGriddle, take maple sugar and add a few drops of water to help you form tiny lumps of sugar. I pushed maple sugar chunks into the pancake batter after I poured it on my skillet. If you don't have maple sugar then you can pour maple syrup over the finished pancakes/sandwich or set it to the side for dipping. The dish looks warm and delicious thanks to the contrast between purple and yellow and toasted sesame seeds. I'll take caramelized sweet potatoes over caramel apples any day.
This weekend I made daigaku imo, which is a Japanese sweet potato (satsuma imo) fried and then tossed with honey and toasted sesame seeds. This is not a dish found in restaurants or stores in America, so I had to make it myself. It took a few tries to get everything just right. The first time I only soaked slices for 10 minutes and then fried the potato, but the insides did not cook completely and the texture was wrong. Another time I fried the potato slices in honey and oil at the same time per a recipe I found online and the texture was chewy instead of crispy. The final and best result came from soaking potato slices in the fridge overnight and then parboiling them before frying. Once they were fried I added honey to the pan and tossed them quickly before serving. Each bite has a satisfying crunch from the crispy outside while retaining a fluffy inside and honey-sweet taste.
#taylorcooks #daigakuimo #satsumaimo #sweetpotato #fall #Japanese #snack One neatly folded breakfast sandwich
Since I had leftover roasted tomatoes and avocado from my salmon tacos this week I decided to remix my morning breakfast with them. To make this sandwich, beat one egg with salt or other seasonings and then cook the egg like you're making a crepe. You want a thin layer of egg because you add sliced tomato in the center when the egg is done and fold the egg up to keep the tomato from spilling out, similar to this. The trick is trying to keep the egg from tearing in the pan or getting too thick to fold. Toast the bun and spread one laughing cow cheese wedge onto the top bun and sprinkle with dried basil. I spread the avocado on after spreading the cheese and basil. The result is a savory and filling sandwich for less calories than most options. Since the sandwich is so low calorie I like to pair it with "chocolate milk" which is a mix of one half-scoop of chocolate protein powder blended with PB2, half a banana, and almond-cashew milk (an additional 16g protein and only 185 calories). I'm stuffed until mid-morning and full until lunch time. 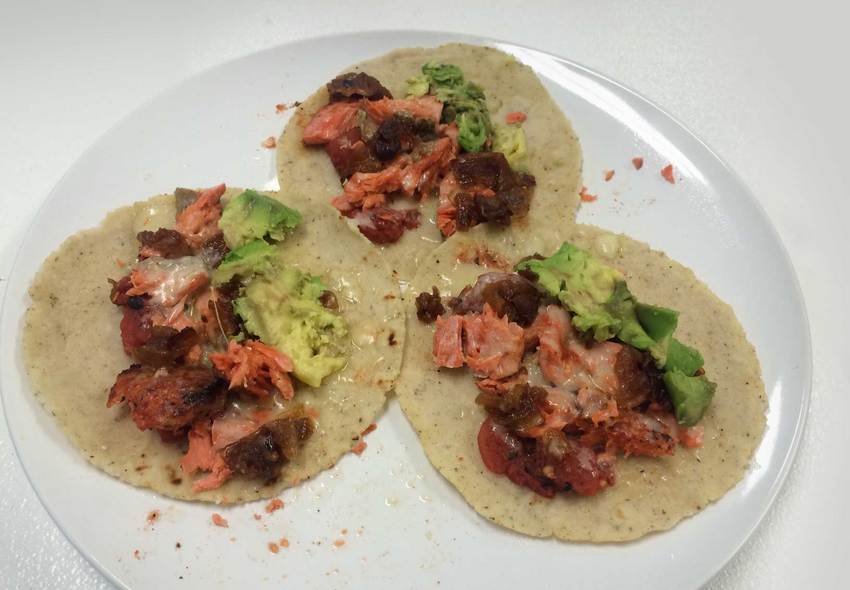 I just found out that today is National Taco Day in America. Taco Tuesday has been a celebrated holiday of sorts for years which makes today the king of all Taco Tuesdays.

I made garlic tortillas this weekend by mixing grated garlic into the dough. They paired deliciously with Cajun-seasoned sockeye salmon, Beecher's flagship cheese, avocado, tomato, caramelized onions and a splash of lime juice.