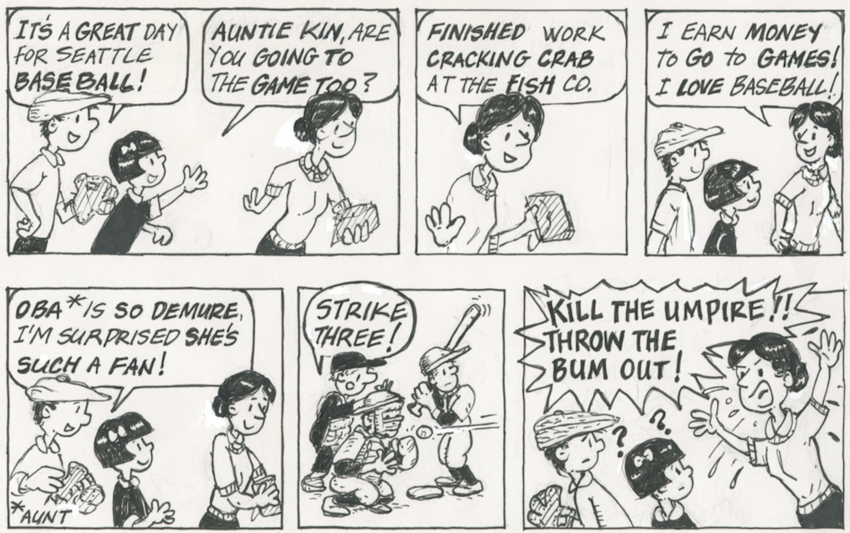 Seattle Baseball during the 1920s and 30s
Kin had trained as a nurse, but being a free-thinker, she was not inclined to the usual offers for marriage in her Mie-ken, Japan, community. Therefore, the offer from the Morookas to marry their son in Seattle intrigued her in 1918. Mr. Morooka owned his restaurant, The Marion Cafe. Again with her self-determining nature, Kin found work elsewhere.

Kin thought, as she ended her day at the Alaska King Crab Fishery, “Cracking crabs for the meat is not hard and gives me the extra money for bus fare and hot dogs at tomorrow night’s Rainier baseball game. Everyone is talking about Fred Hutchinson and he is sure to get his 27th win.” She even went to games all by herself.

The all-Japanese baseball Courier League in the 1930s was even more fun and she walked to those games when they were in town. This one Sunday she sat with Ken and Miki Ishida. Ken was for the White River boys because his nephew was the catcher, “Hey Okimoto, show them your good change up!!! Nakanishi! Nakanishi! You know what to do. Give him the right sign!!!!”

Kin grabbed Ken’s right arm with her, hard as a rock from all the years of working at cracking crab, hands, "Calm down!! You’re too loud. You’re going to mess them up!”

Today is July 23rd and the first of the short 2020 Mariner Baseball season because of all the Covid virus issues. I am reminded of Auntie Kin, who was a healthy almost 100-year-old by 1993 and a huge baseball fan in Seattle. By 1993, Kin was living with her daughter, our Auntie "Onions", who at age 95 uses her season tickets for day games and says, “Mom got up, opened the blinds, lay down again and was gone. She was on no medications. I want to be like her.” 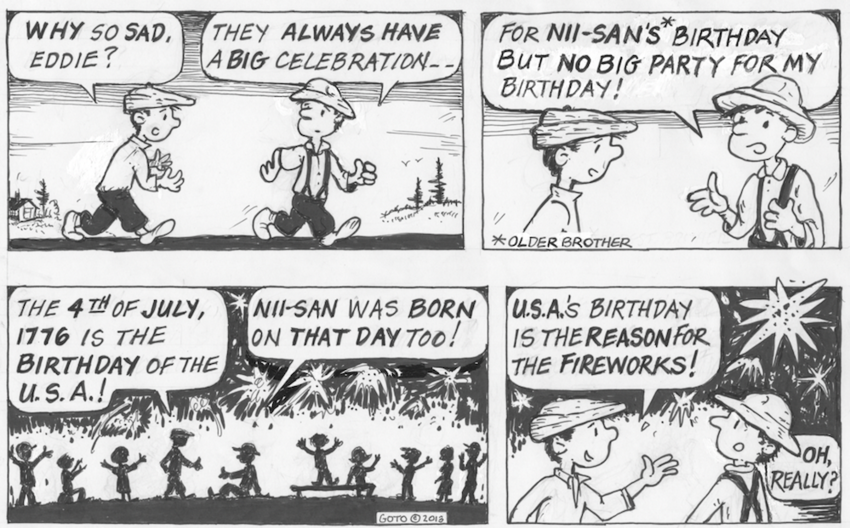 This is July and I awakened this morning thinking about birthdays. According to google: " a birthday signifies your beginning and the joy of life. Every human on earth has been given a chance to fulfill their own unique mission. A birthday is an important and momentous occasion not to be understated. It is a time to celebrate, reflect and give thanks."

FOR SURE: DEMOCRACY AND EQUALITY OF INDIVIDUAL OPPORTUNITY IS WORTH CELEBRATING EACH JULY!

My mother never knew when she was born. Her father probably didn't go register her birth until weeks later and couldn't remember the exact date. Besides, in Japan one didn't celebrate individual birthdays. Everyone just celebrated January first.

Also, one rarely used individual names. Others referred to the family name and the first son or second son, first daughter or second daughter, last child and etcetera.

In our household with summer birthdays, counting the days to a big celebrations along with individualizations is paramount.

I'm happy to be in the USA and not in Japan. But with democracy since WWII, our relatives in Japan are also celebrating the birthdays and individuals more. 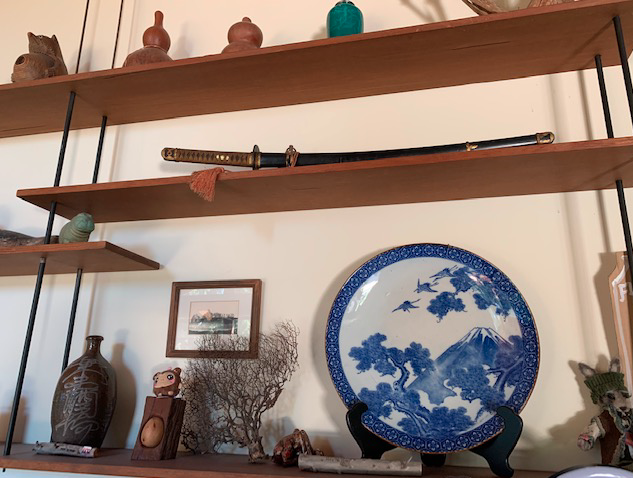 It’s an 18-inch Japanese blue Imari porcelain serving plate. It may have been old when my Great Grandma Matsu was using it over 100 years ago in the late 1800s. Sam and I found it as we climbed the ladder to the loft of the barn behind her house in Hiroshima, Japan. Her oldest son, Grandpa K, had her house built with the money he sent home to Hiroshima working at a dairy farm in Kent, Washington, around 1911. The story is that she got so excited with the roof raising, took a hot bath with her dirty toddler son, her seventh child; had a stroke and passed away.

Finding the plate was part of Sam and my 10th anniversary trip in 1971. I had dreamed about going to Japan, since I was 9-years-old, attending Saturday Japanese School for 6 months in Gardena, California, when I first learned about Japan.

We were staying in East Hiroshima, Aki-Nakano, Sam’s Dad’s birthplace, with Uncle Jiro. The one-hour taxi ride, brought us to my Grandpa K’s birthplace - Ozuka-Numata-cho, the northern part of Hiroshima city. We asked the taxi driver to wait off the main road by the irrigation ditch.

Mr. Sugita, known for his ability in the ancient Japanese craft of nailless carpentry, was expecting us. We had met him in Seattle when he visited his son, Fred Yasunori - carpenter who built the tea house in the U of W Arboretum Japanese Garden. My Grandpa K gave the house to his sister, Tatsu, after his father, my great grandpa J, passed in 1939 and Mr. Sugita was her husband.

The oppressive Japanese summer air was gone so the crisp October morning was invigorating as we walked the dirt lane to the one-story farm house with the blue tile roof - like almost all roofs we had seen since we had been in Japan. I never figured out where the water-wheel was. My Mom had described one her grandpa had built for irrigation. My mom lost her mom in 1926 when she was 8-years-old. She and her three younger brothers were taken to this home in Hiroshima from Kent, Washington, by their grandfather for 8 years until 1936 when they came back to America.

We took off our shoes, left them in the engawa (a porch like room surrounding the front of the house) and had tea in the tatami room. We had a conversation in my limited Japanese, asking Sugita-san to show us around. First we had to use the “te arai” (literally, hand washing place).

Mr. Sugita waited for us by the kitchen door where there was a rack of persimmons hanging to dry for a winter treat. The dirt-floor kitchen was engaging. Sam’s aunt in Aki Nakano also had a dirt floor kitchen and we had watched her sweep in the morning, wearing a special pair of rubber slipper kind of shoes, and hand sprinkling water around to keep the dust down.

Hoping to find a momento or two to take back to Seattle, Mr. Sugita showed us the small unpainted shed-like barn. There were several boxes in the barn loft so we didn’t feel bad asking if we could have three or four of the dishes in the wooden crates stuffed with straw. It reminded us of how all the Japanese keep their living areas serene, even without any storage furniture and clutter. We were inspired to take this concept home to our own living areas.

We carefully carried the dishes down the ladder and back to the house. Mr. Sugita had no problem finding cardboard, twine and a silk tie-died furoshiki (wrapping cloth) to be sure there was no danger of breakage. It fit nicely in the extra blue Samsonite, empty suitcase Sam and I had taken for such items and souvenirs.

Shortly after we were there, the property was sold for a monorail that accessed the stadium for the world games.

Today, almost 50 years later, the dish sits prominently on the living room shelf with our many treasures, reminding us of the various stories of the 56 years Sam and I were together. 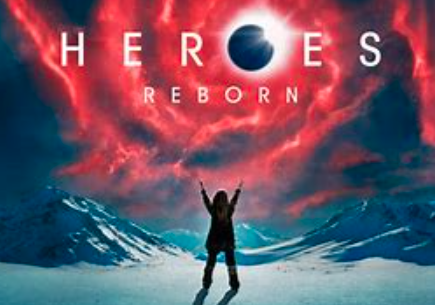 This morning I listened again to a YouTube video by Adm. Wm. McRaven - MAKE YOUR BED. I’ve had his book for years, but it’s important to reaffirm: “Making your bed seems insignificant, but if you get the little things right, the big things will follow.”

In his talk, McRaven cites his go to individuals and Malala was someone he mentioned. On July 12th, she will be 23-yrs-old: “As a young girl, Malala Yousafzai defied the Taliban in Pakistan and demanded that girls be allowed to receive an education. She was shot in the head by a Taliban gunman in 2012 but survived. In 2014, she became the youngest person to receive the Nobel Peace Prize.”

It occurs to me, as I write, that I remind the others in my household of these heroes.

I’m reviewing the words of Adm. McRaven because he is part of a new book by Adm. James Stravridis, SAILING TRUE NORTH, where Stravridis writes about his own heroes. He ends his two hour interview on Book TV with, “I am free. I fear nothing and I want nothing.”

Heroes like this are changing my world. How can I pass this on?

IT’S A GOOD FEELING TO COME BACK TO A WELL-MADE BED!!!

Use (something) to maximum advantage
during this 2020 situation.
Going to the dictionary “leveraging” means: “to use something that you already have, such as a resource, in order to achieve something new or better: This new strategy is about leveraging the relationships we have with our customers.”

So what do I already have?

I have family. I have a house, paid for, with a great view. I have my health as I’m 81 years and on no medications. I have my interest in my Japanese Heritage, psychology, philosophy. I have social support - for things, advice, physical help, emotional and love. I have time to learn.

What is “the achievement of something new or better” mean?

I believe in innovation. Matt Ridley has written a book: HOW INNOVATION WORKS. “We need to change the way we think about innovation, to see it as an incremental, bottom-up, fortuitous process that happens to society as a direct result of the human habit of exchange, rather than as an orderly, top-down …. ‘INNOVATION FLOURISHES IN FREEDOM’.”

Covid has brought us all home, away from a top-down office/business, physically. Protests have taken away some national authority. So, where do I start “an incremental, bottom-up”?

What is the human habit of exchange?

WHAT CAN I DO NOW?

I’m choosing to add to my “ISOLATION DEGREE” - reading and writing as suggested by Dr. Jordon Peterson. Matt Ridley’s blog suggests: “It will be an innovation that eventually defeats the virus: a new vaccine, a new antiviral drug — or a new app to help us avoid contact with infected individuals.”

I choose to be optimistic! Ridley adds that when he was born in 1958, 2/3 of the world was considered in poverty. The latest figures state that 60k come out of poverty every day and the poverty level is 8%. That means we have more financial FREEDOM that will increase opportunities for "INNOVATION".

Victor Frankl in MAN’S SEARCH FOR MEANING, one of the most quoted individuals I know of writes. When he was held in Auschwitz and on bits of bread and water for sustenance he realized the prison guards could imprison his body, but he had FREEDOM of his mind!!!

I am Covid-Isolating and have ALL KINDS OF FREEDOM to LEVERAGE!!

Today, Lori Matsukawa, retired anchor from King 5 TV, interviewed me because I started the OMOIDE writing group in 1991. She will be leveraging this information for a virtual TOMODACHI event in August to raise money for the Japanese Cultural and Community Center of Washington.

We are encouraging viewers to join us in the fun of getting together to share our stories and write!!